Norton Manufacturing (Norton), a manufacturer of automotive, medium and heavy-duty trucks, off-highway and aerospace crankshafts, partnered with a specialist in induction-coil optimization and a manufacturer of magnetic flux controllers, to address their induction coils. The first phases of this project have led to significant improvements in the induction coil performance. The following details the preliminary findings from this collaboration and provides an outline for future developments.

Initially, clamshell inductors were used with mechanical, hydraulic or pneumatic locking mechanisms. As automotive volumes increased, this style of induction installation had limited ability to keep up with production. To solve this problem, Elotherm developed a non-encircling inductor that would rotate with the part in 1941. Further design improvements occurred around 1950 with a U-shaped induction coil [3]. In this process, the crankshaft rotates in centers. U-shaped induction coils with magnetic flux concentrators are applied to the journals, which must be hardened (Fig. 1). Hard material spacers installed on the coil structure provide fixed coupling gaps between the coil and the part surfaces. 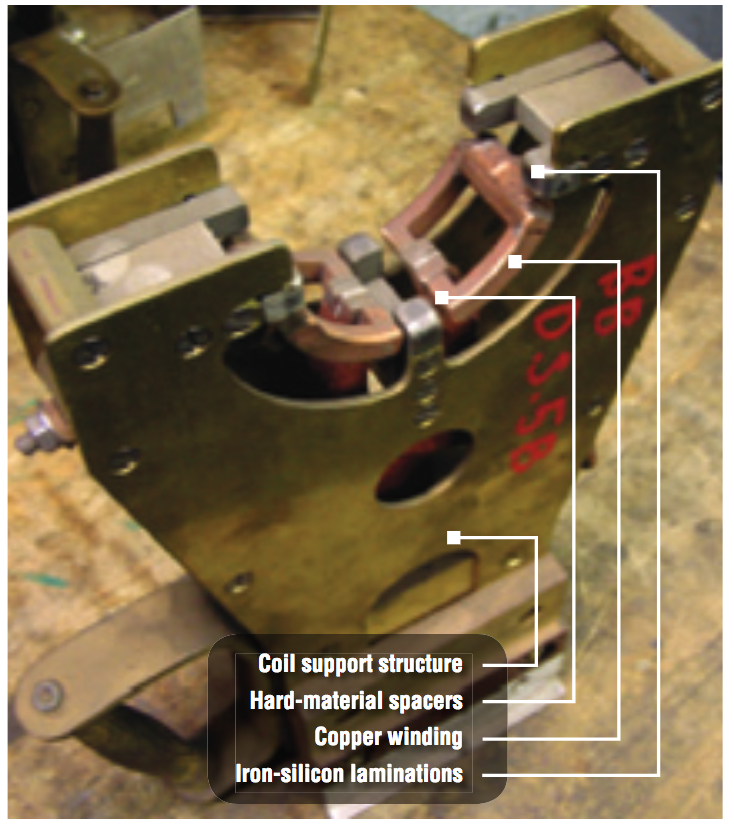 Norton Manufacturing Company, located in Fostoria, Ohio, has been in business for over 50 years and has been producing crankshafts since 1978. Norton’s customers include General Motors, DaimlerChrysler, Ford Motor Company, Volvo/Mack, Textron Lycoming and International Truck and Engine. Norton supplies crankshafts for a wide range of vehicles, including the Dodge Viper and the Humvee military vehicle.

In 1995, Norton purchased equipment and began using induction for hardening the crankshaft journals. In 2004, the power supplies were upgraded to new IGBT based units from AjaxTOCCO Magnethermic. Three machines are currently dedicated to induction hardening of crankshafts, utilizing more than 150 different induction coils.

Induction coils are developed, built and maintained in-house with a fully equipped induction department. This allows Norton to closely monitor the performance of their coils and track critical values such as number of cycles between failures, number of coil rebuilds possible between manufacturing of new coil, etc. It also allows them to examine the failure modes of all the coils it uses in an effort to improve both coil performance and coil life.

Rapid product-development cycles and tighter heat-treatment specifications due to the need for reduced variation to meet six sigma quality requirements are placing increased pressure on vehicle-part suppliers. Despite the experience and knowledge present at Norton, these market forces have created a demand for even better understanding of the induction-heating process. Continuously changing tighter product requirements mean what was good just a few years ago is no longer good enough. At the same time, the marketplace price pressures mean the component manufacturers must improve the processing capability of their equipment relentlessly without increasing cost [4].

Norton’s analysis of their operations showed that the biggest benefits could be achieved by improving the overall quality of the induction coil. The induction coil quality was defined by the following parameters:


The relative importance of these variables depended upon the specific features of a given crankshaft.

To work on increasing the overall tooling quality, Norton collaborated with Fluxtrol, a company specializing in induction-coil optimization and magnetic flux controllers.

A collaborative evaluation of the existing induction-coil technology revealed that the iron-silicon laminations used as flux concentrators limited overall coil quality. In manufacturing and developing inductors, stacks of laminations were applied selectively to the induction coil to balance heating between different areas of the part to produce the desired heat-treatment pattern. Laminations have several limitations in their use on crankshaft inductors:


The main failure mode of Norton’s crankshaft inductors was copper cracking under the laminations (Fig. 2). This style of induction coil requires very high currents, because the copper-winding surface area is much smaller than part surface area. The high currents lead to excessive power densities in the coil copper, which must be removed by the cooling water flowing through the inductor. 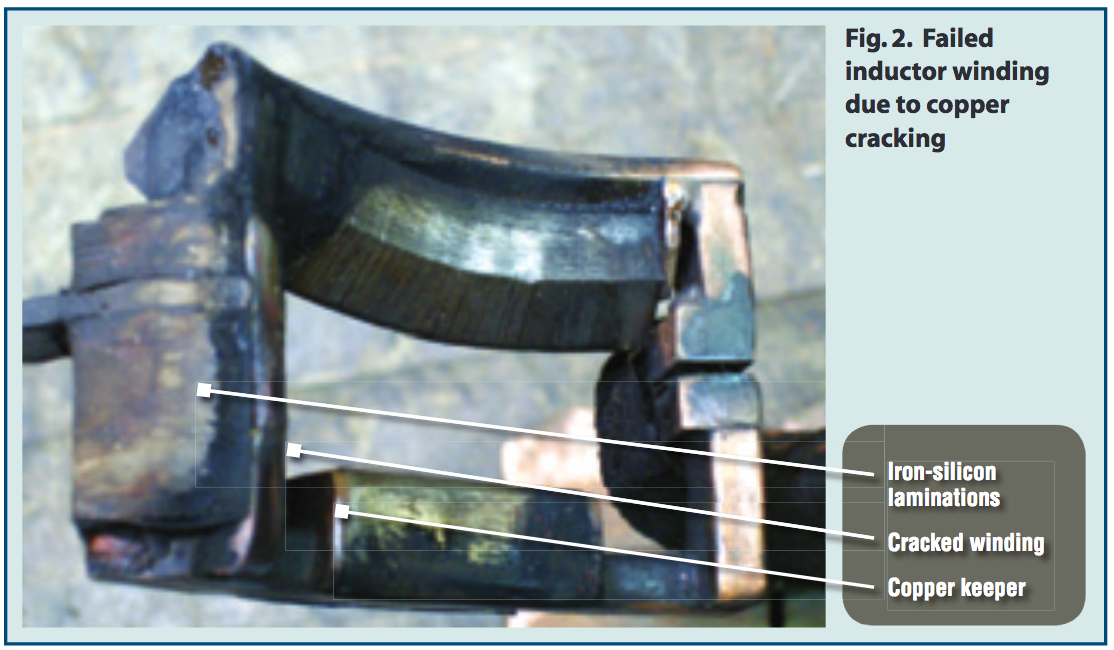 When laminations are used as a concentrator on these inductors, there are significant limitations as to how close the stacks can be installed to the changes in copper winding direction due to 3-D magnetic fields. The copper keepers also reduce the “effective” length and surface area of the inductor, increasing the current demand, because the same power needs to be induced in a shorter length.

Higher currents lead to even higher power densities in the areas of the winding under the laminations, causing significant temperature rise in the copper. When power is turned off, the heat is removed very quickly and the copper returns to the water-cooling temperature. This cycling of temperature causes stresses to develop in the copper that lead to crack initiation and eventual failure [5]. Small reductions in copper temperature can lead to significant increases in induction coil lifetime.

There are two ways to reduce the copper temperature: improve the cooling circuit and reduce the local power density. Norton is currently running separate tests to isolate the variables on both methods and has positive results for both. For improving the cooling, new copper tubing with better heat-removal properties is being tested.

To reduce the power density, Fluxtrol A has been used as a replacement for laminations. Fluxtrol A is a soft magnetic composite (SMC). This material can be used effectively in 3-D magnetic fields and does not require copper keepers [3]. This allowed for the use of a longer length of concentrator on the same winding and a subsequent reduction in the coil current required to produce the same total power. The reduced coil current has two beneficial effects:


Several tests have been made with Fluxtrol A to date. In all cases, there has been an improvement in the overall induction-coil quality. No changes were made to the inductor copper other than elimination of the copper keepers. The SMC material was machined to the same cross-sectional dimensions as the laminations that were on the standard production coils. The material was glued to the copper winding using Duralco 4525 epoxy as shown in Figure 3. Two examples of induction-coil quality improvement are discussed below. 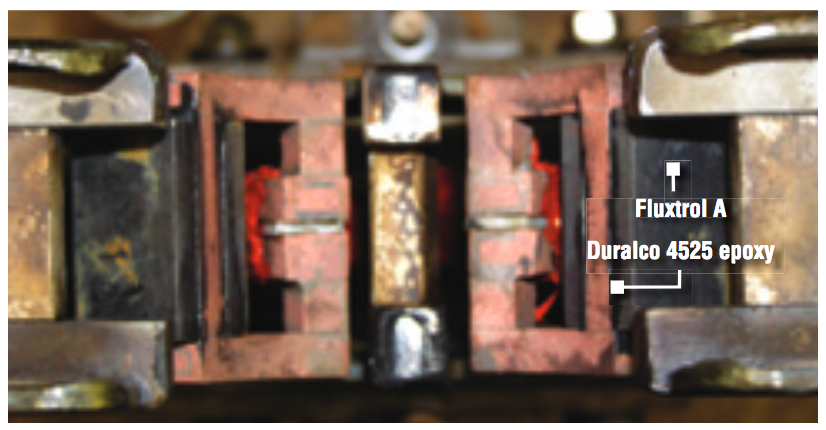 In the first application, the material was applied to a full fillet-hardened crankshaft inductor. It was machined to the same cross-sectional dimensions as the laminations, but the length of the concentrator was slightly longer. A sample part was made using the same power and time settings as for the induction coil with laminations. Coil current was lower for the same total power. Metallurgical tests showed that the pattern was more uniform and hardening depth increased in the critical fillet area (Fig. 4).

Fig. 4. Heat-treatment pattern for a fillet-hardened crankshaft with laminations (left) and Fluxtrol A (right)

In addition, SMC material was also less restricted on where it could be used on the inductor due to its ability to work in 3-D fields. During the initial process setup, if winding dimensions were not quite exact, the SMC material could be modified with relative ease right on the coil to fine-tune the heat pattern. Using these additional possibilities, they were able to produce parts closer to the middle of the specifications and reduce the initial process set-up time.

Despite Norton's knowledge and history with crankshaft induction hardening, two of the main problems with crankshaft hardening are limited induction coil lifetime and the ability to achieve certain heat-treating patterns. Norton Manufacturing and Fluxtrol Inc. are working together to improve Norton’s overall induction-coil quality. The first phases of this project have led to significant improvements in the induction-coil performance.