Dilatometry test systems are commonly used for characterizing the transformation behavior in steels and induction heating is frequently selected as the heating source. In these systems, the steel test specimen is assumed to have a uniform temperature throughout the sample. This is a good assumption for slow heating rates with small specimens, however, for induction hardening heating rates this may not be accurate. Using computer models, it is possible to predict the temperature dynamics of the sample, both radially and axially, during heating.

O1 tool steel in the quenched condition was utilized to characterize and model heating temperature gradients. The case of a 50°C/s heating rate was presented previously [1]. In this study, specimens instrumented with multiple thermocouples were induction heated at rates up to 500 °C/s. The test data and geometry were evaluated with 2-D models to characterize transient temperature gradients. The goal of the modeling is to better characterize temperature corrections required when rapid heating is used to determine transformation behavior during rapid induction heating. This paper presents the data for faster heating rates and quantifies the impact of the different heating rates on the dynamic temperature distributions in the sample.

Most of the data on phase transformations for various steels available in the literature is for equilibrium conditions corresponding to prolonged holding times on the order of many hours. In induction heat treating or other high power density heating methods (flame, laser, etc.), heating times are typically from 0.1 s to a few hundred seconds. The corresponding heating rates are about 5 °C/s to around 10,000 °C/s. Under these rapid heating conditions, the steel does not reach equilibrium conditions and therefore many of the corresponding curves from literature are not accurate. Both Ac1 and Ac3 for steels are sensitive to both heating rate and prior microstructure, but there is very little quantitative data available on these relationships [2].

Improved mechanical properties of steel components have been achieved using short austenitization cycles in combination with high cooling rates. Some of these improved results have been attributed to finer austenite grain sizes with nearly 100% martensitic structures [3-4]. Depending upon the trials, different mechanisms have been proposed to explain the improved properties such as finer austenite grain size or better residual stress distributions [4]. However, more work needs to be done to better understand and quantify the conditions under which improved properties can be achieved in order to maximize the potential of induction heat treating.

The testing devices being used to study non-equilibrium transformation dynamics and subsequent properties at Colorado School of Mines include a Gleeble® 3500 resistance heating system with incorporated gas and/or liquid quench and a TA Instruments DIL805 dilatometer. The DIL805 uses a 3 kW, 150 – 400 kHz induction heating power supply for a heat source followed by gas quenching. Both of these devices have the capability to physically simulate induction heat treating processes on small sample sizes to characterize material behavior and subsequent properties. For both systems, temperatures are monitored during the process using thermocouples attached to the specimen surface. For the current study, only the DIL805 system is considered.

The cases of heating were studied using the DIL805 dilatometer as follows:


The goal of the computer models is to accurately predict the distributions of temperature in the sample during heating and holding. The specimens used in the test cell were 4 mm diameter by 10 mm long. The samples were held in place using fused silica rods. A picture of the test cell is shown in Fig. 1. The specimen is suspended between spring loaded hollow fused silica rods and a linear voltage displacement transducer is utilized to measure axial length changes. The unit is programmable such that linear heating rates can be attained within the limits of the power supply. For this study, heating and holding were programmed. Three thermocouples were used to measure and control the temperature of the specimen during heating and holding. Considering the symmetry of the system, the thermocouples were placed at the center (TC1), quarter length (TC2), and end of the specimen (TC3), with TC1 used for temperature control. 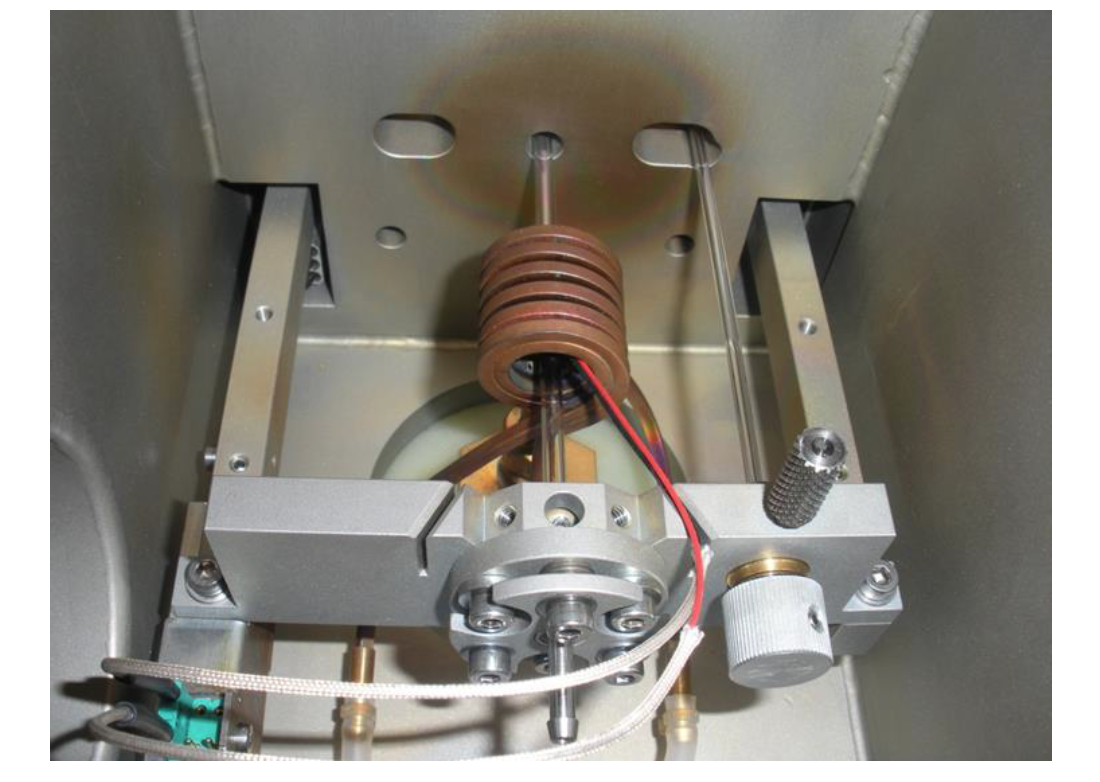 In combination with the material tests, Fluxtrol, Inc. modeled the heating process using Flux 2D [5] software to understand the temperature distributions in the components. The reason for the modeling is to determine the real temperature distributions in the samples versus time, which can then be used to reinterpret and adjust the material behavior dynamics from the dilation measurements.

2-D electromagnetic and thermal models were used to understand the temperature gradients in the specimen. The material properties important for simulation were developed in a previous study [1].

The heating models were developed by adjusting the current supplied to the inductor so that the heating rate matched the desired value based upon the temperature at the surface of the center of the sample, the same point at which the dilatometer controls temperature. The material properties and heat transfer coefficient were modified until the experimental and model results agreed [1]. After the material properties were determined, the model’s agreement with the experimental results was evaluated by comparing temperature results from the two other thermocouples.

The cases selected were for 0.1, 0.5, 5, 50, and 500 °C/s heating rate, 900 °C austenitizing temperature, and 1 s hold. A data plot showing temperature data for TC1, TC2, and TC3 for the 0.1 °C/s is shown in Fig. 2. The plot has six graphs, experimental and model results for each of the thermocouples. Due to the very slow heating rate, the temperature gradients are small, with no significant axial temperature gradients observed. The results also show close agreement between the experimental and model results. 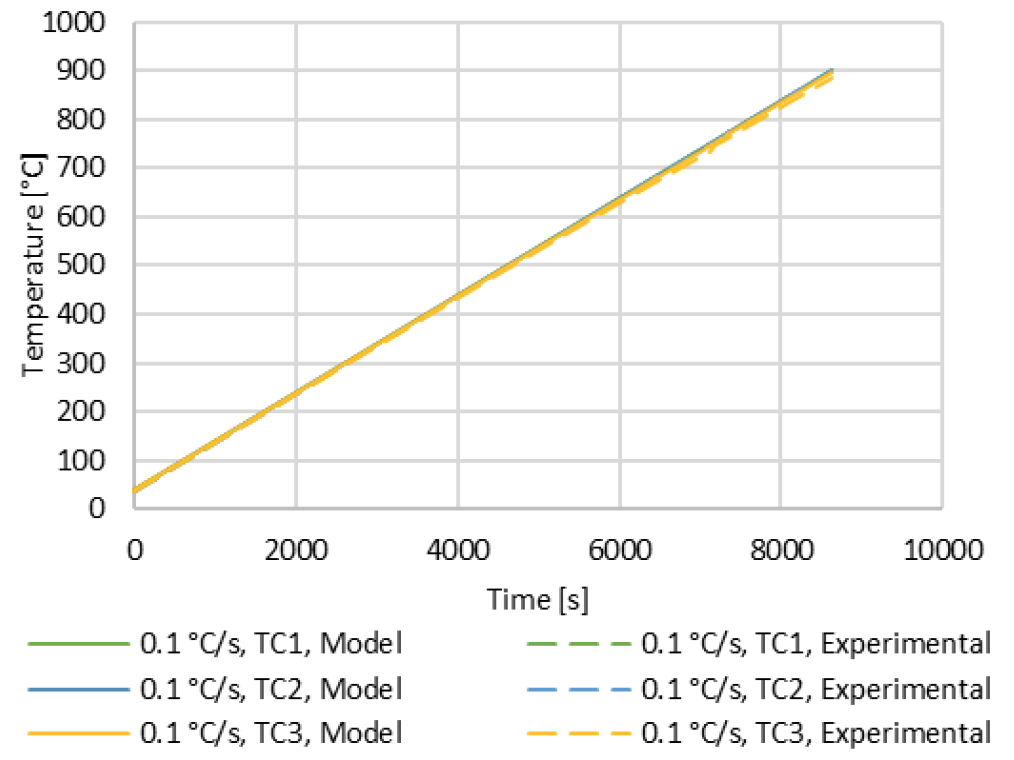 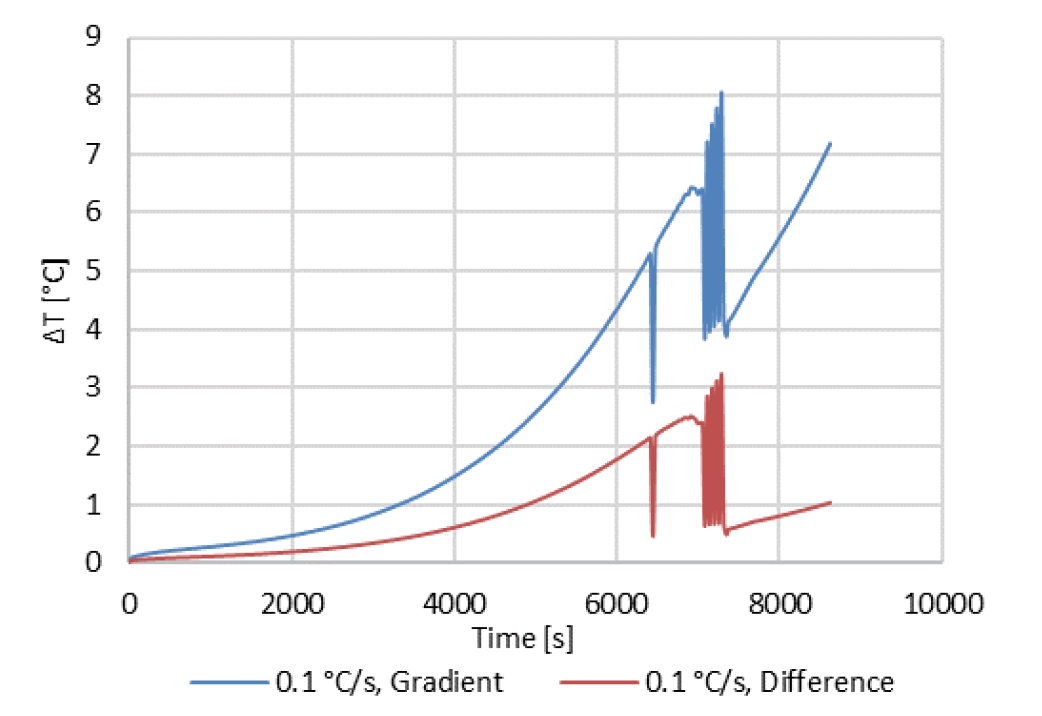 Figure 3: Temperature gradients and differences in the specimen from the model for the 0.1 °C/s case. 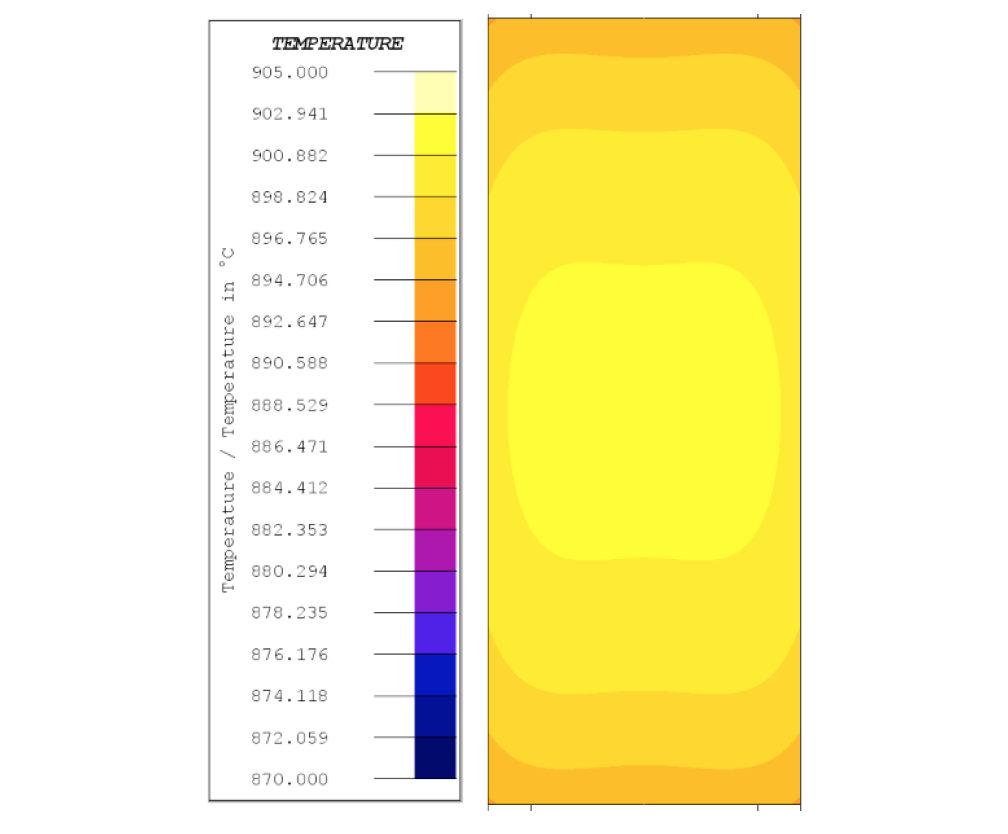 Figure 4: Temperature distribution map at the end of the temperature hold for the 0.1°C/s case. 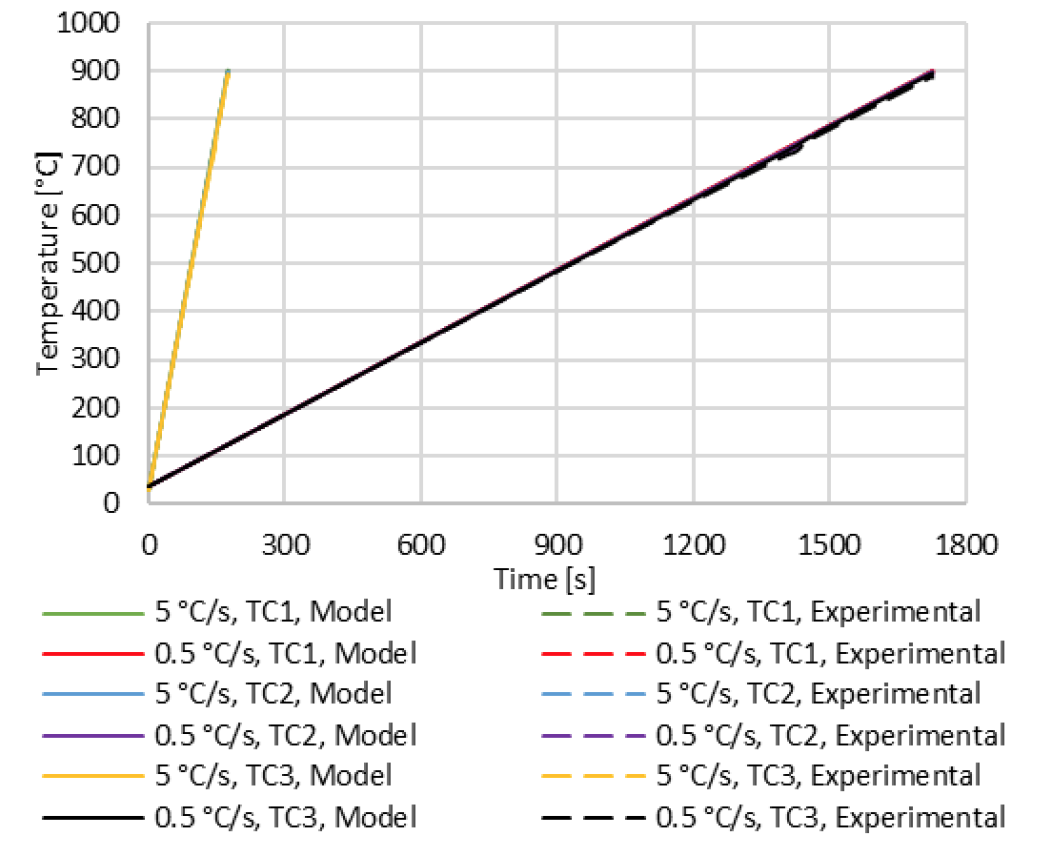 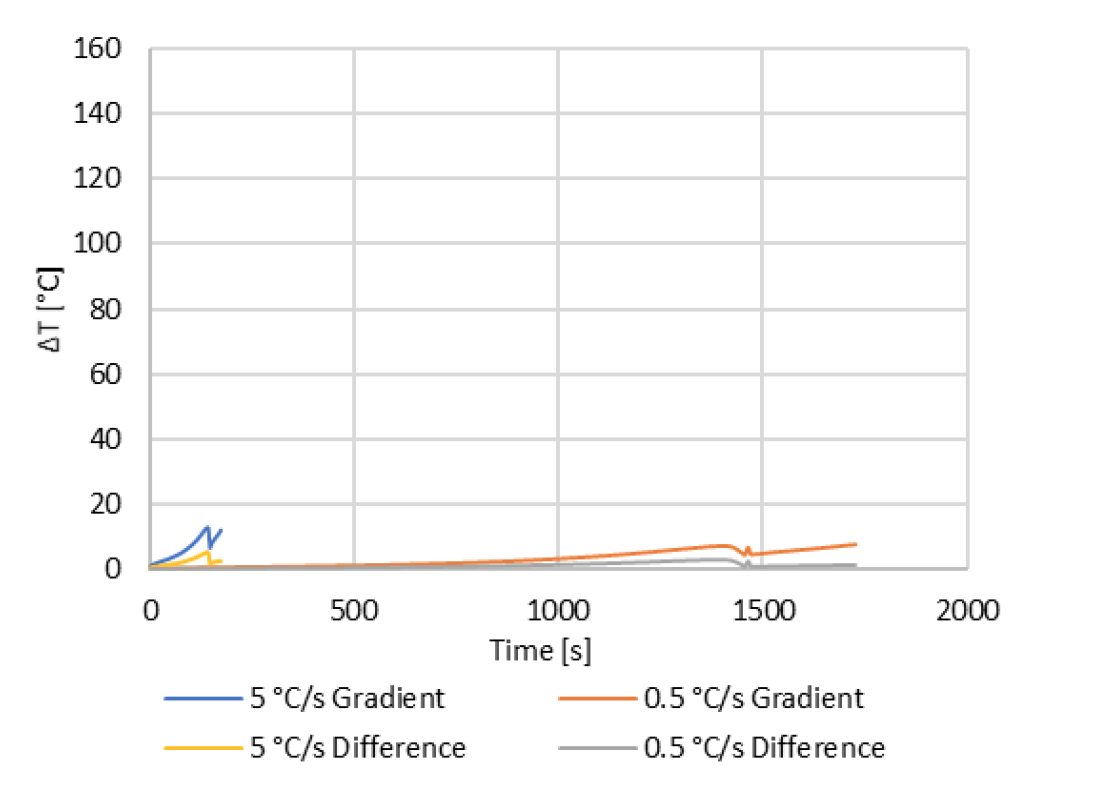 Figure 6: Temperature gradients and differences in the specimen from the model for the 0.5 and 5 °C/s cases. 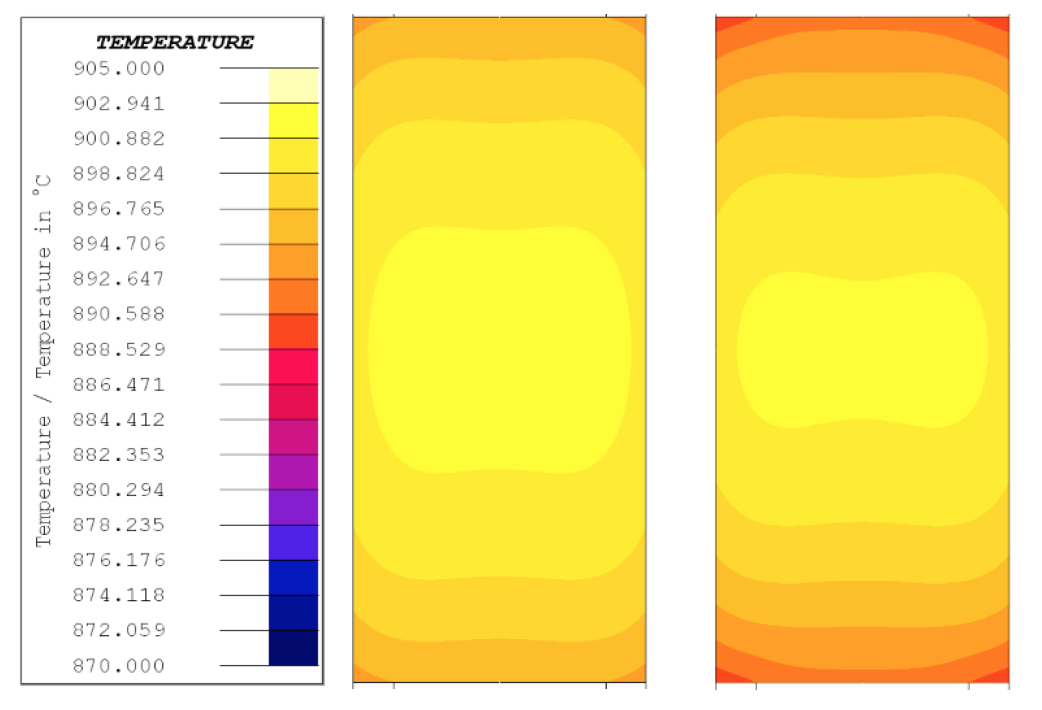 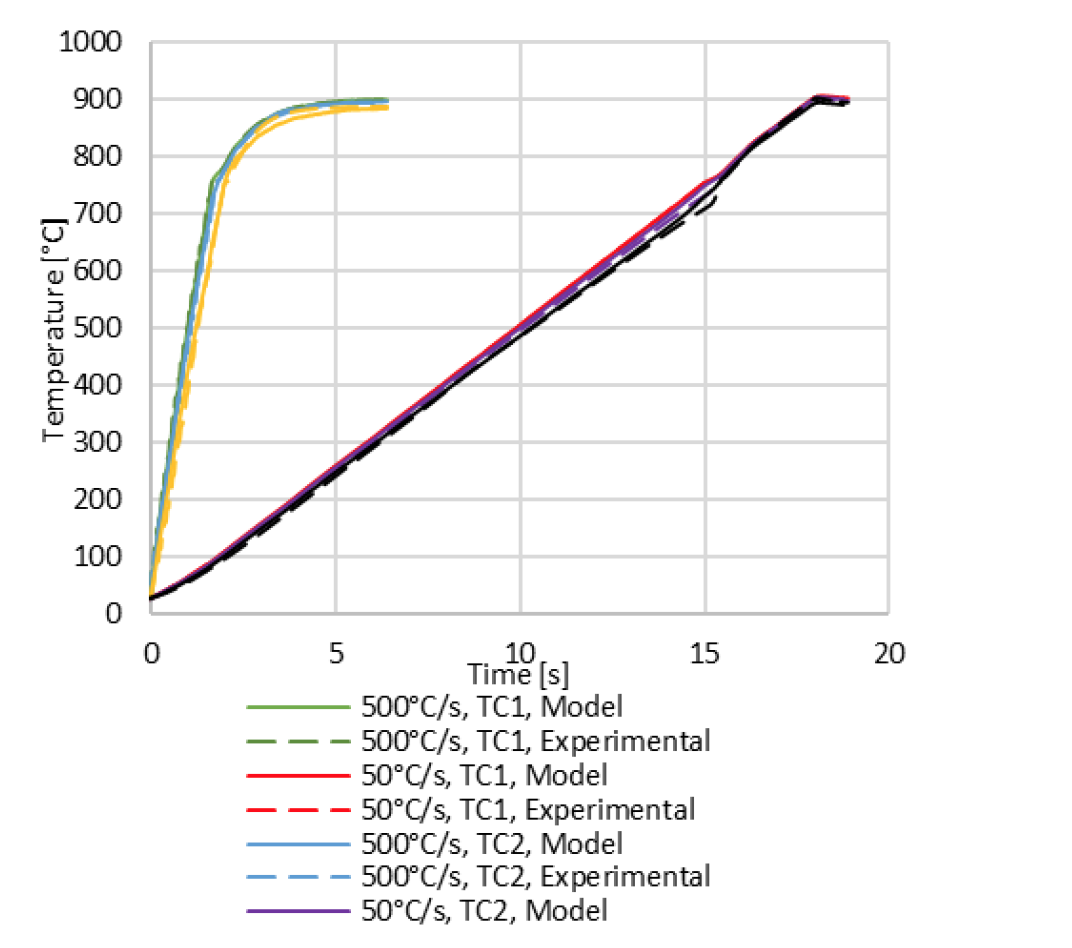 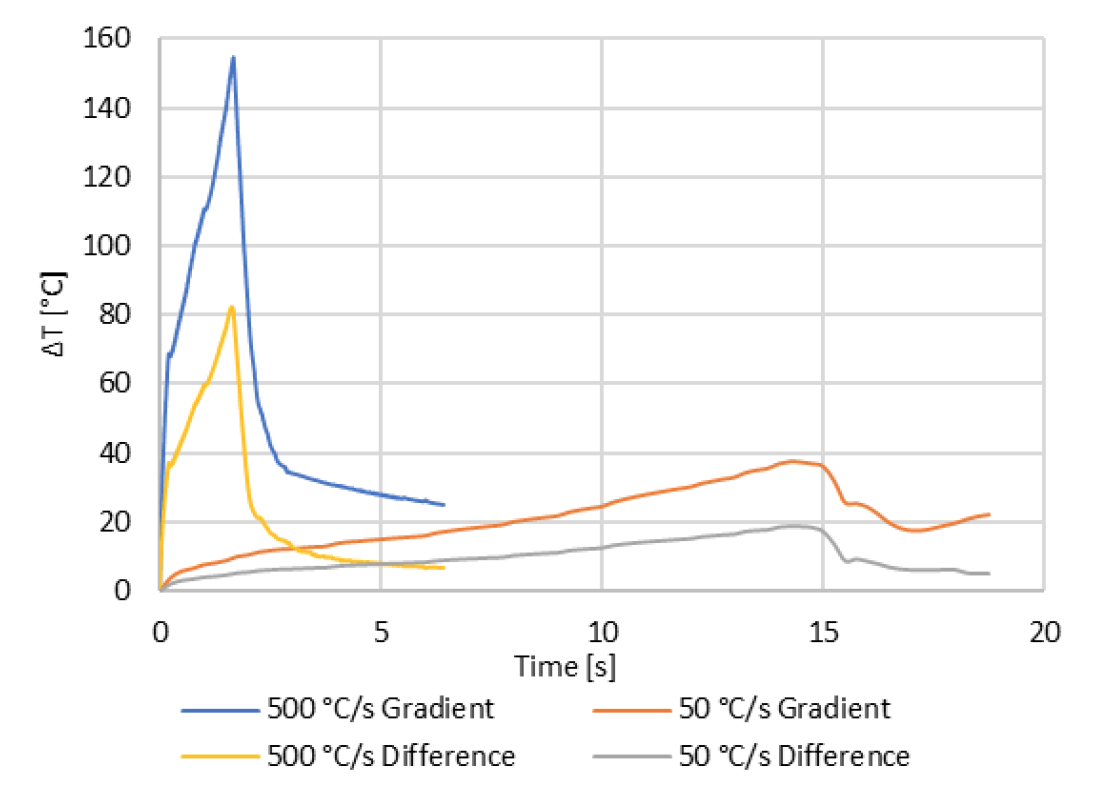 Figure 9: Temperature gradients and differences in the specimen from the model for the 50 and 500 °C/s cases. 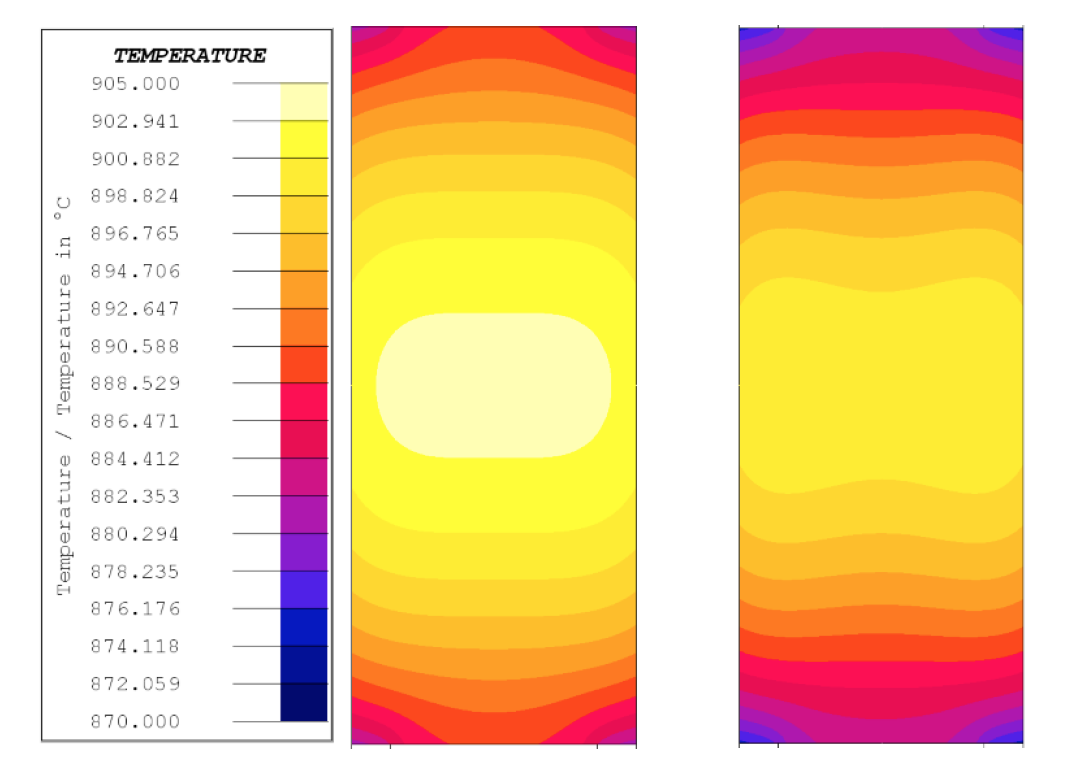 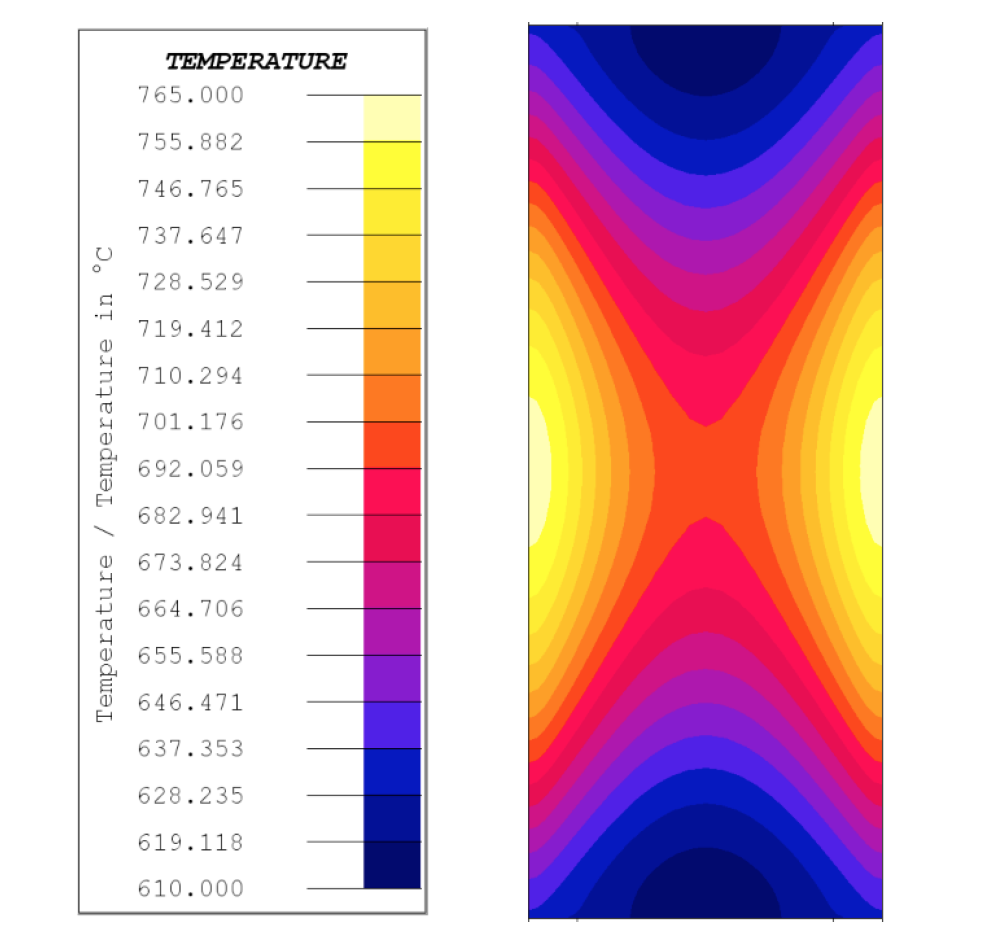 The temperature distribution map in Fig. 11 shows the gradients in the specimen for the 500 °C/s case when they are the greatest. The results show a large axial calculated temperature gradient, with TC1, TC2, and TC3, measuring 760, 733, and 657 °C, respectively. The measured data for TC1, TC2, and TC3 are 760, 727, and 648 °C, respectively. The lowest calculated temperature at that time is 612 °C, at the center at the end of the specimen. 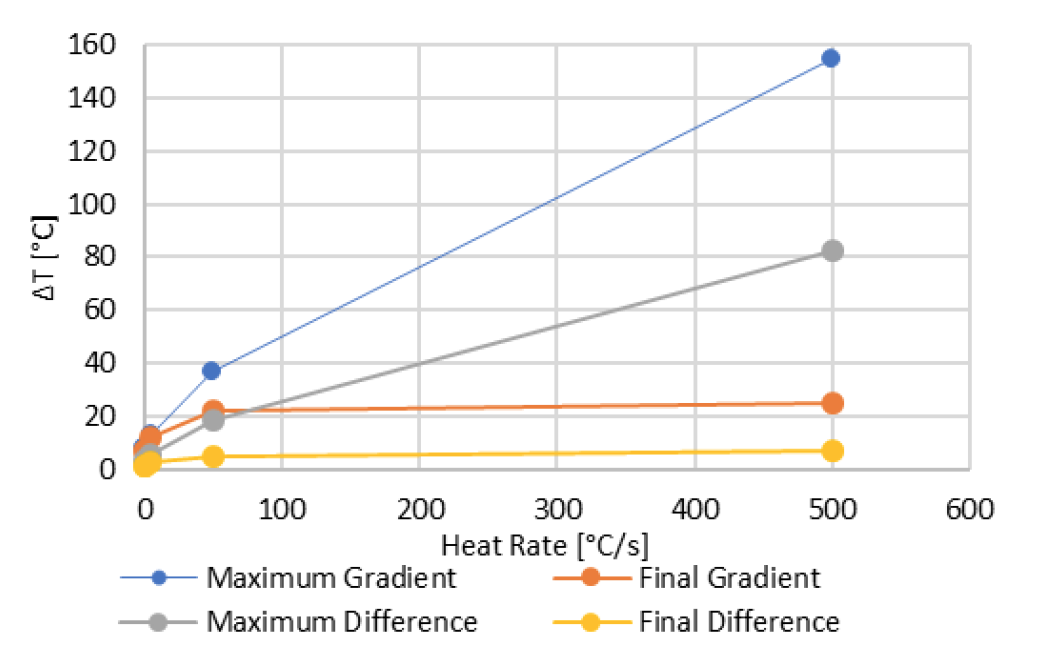 Figure 12: Maximum and final temperature gradients and differences plotted for every heating rate.

A plot showing the average temperature vs the model’s TC1 temperature for every case is shown in Fig 13. 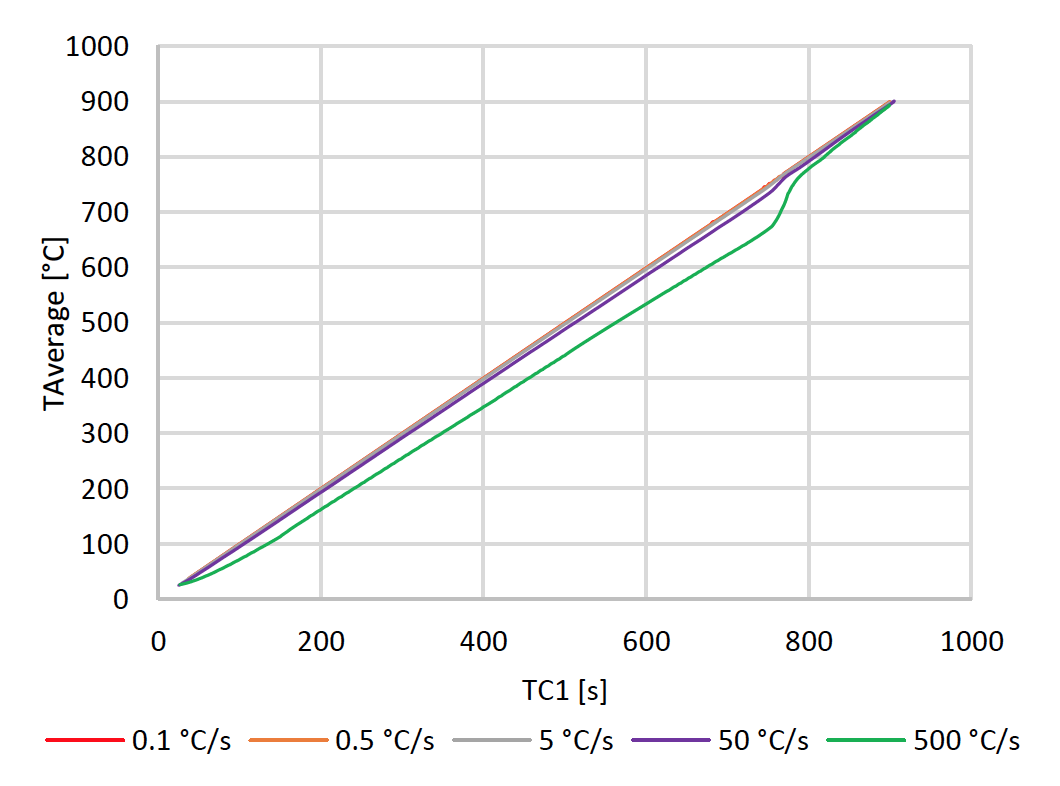 Figure 13: Temperature average vs TC1 temperature for every case.

During the heating process the specimen’s length was measured for each case. Dilatometry curves for different cases are shown in Fig 14. 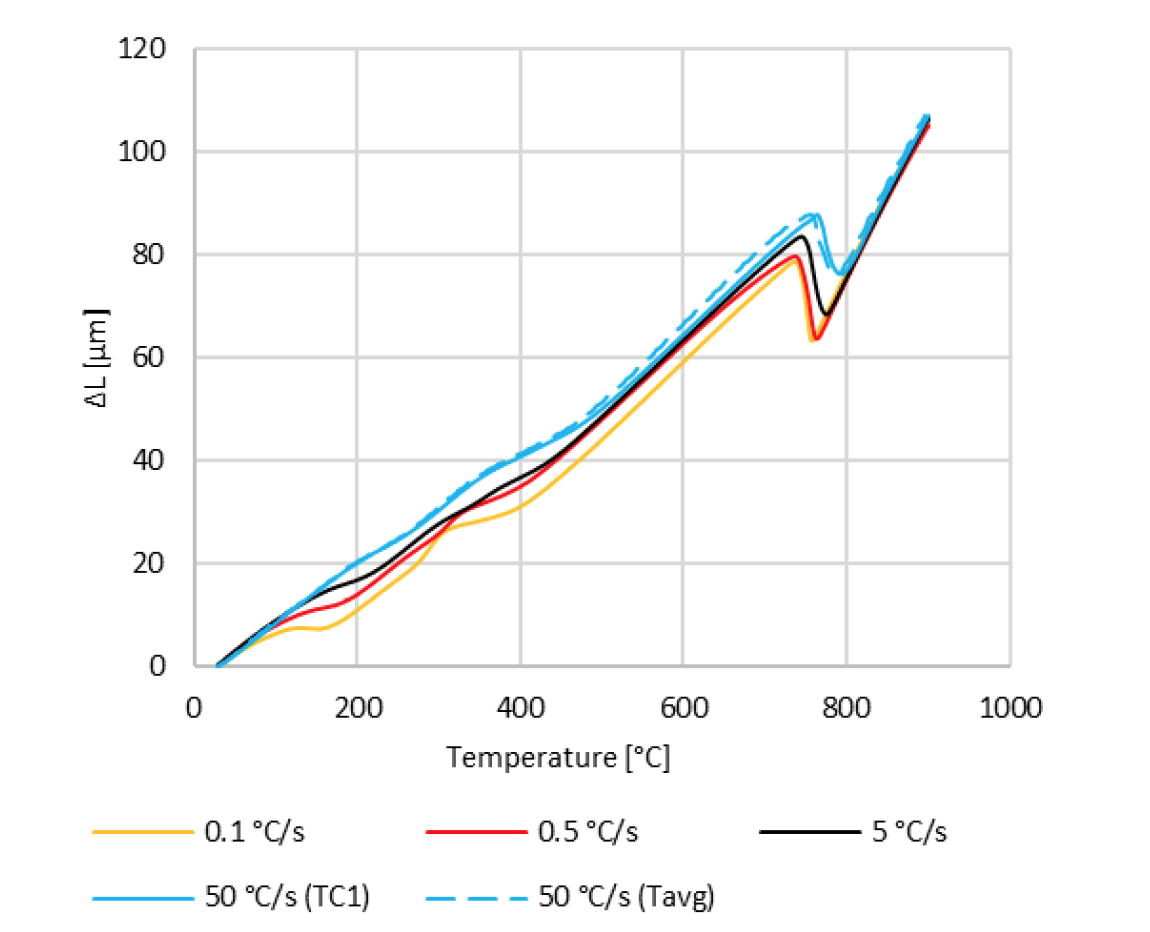 The results in Table 1 indicate that for the lower heating rates the measured temperature can be considered the same as the average specimen temperature. Additionally, the measured Ac1 and Ac3 values can be considered the same as the corrected values. The results also show that for the 50 °C/s case the values for Ac1 and Ac3 increase, so does the difference between their measured and corrected valued. This behavior is also expected for higher heating rates.

Results for the change in dilation with temperature plotted as the first derivative with respect to temperature is shown for the different cases in Fig 15. The shift in measured transformation start and finish temperatures is clearly evident. 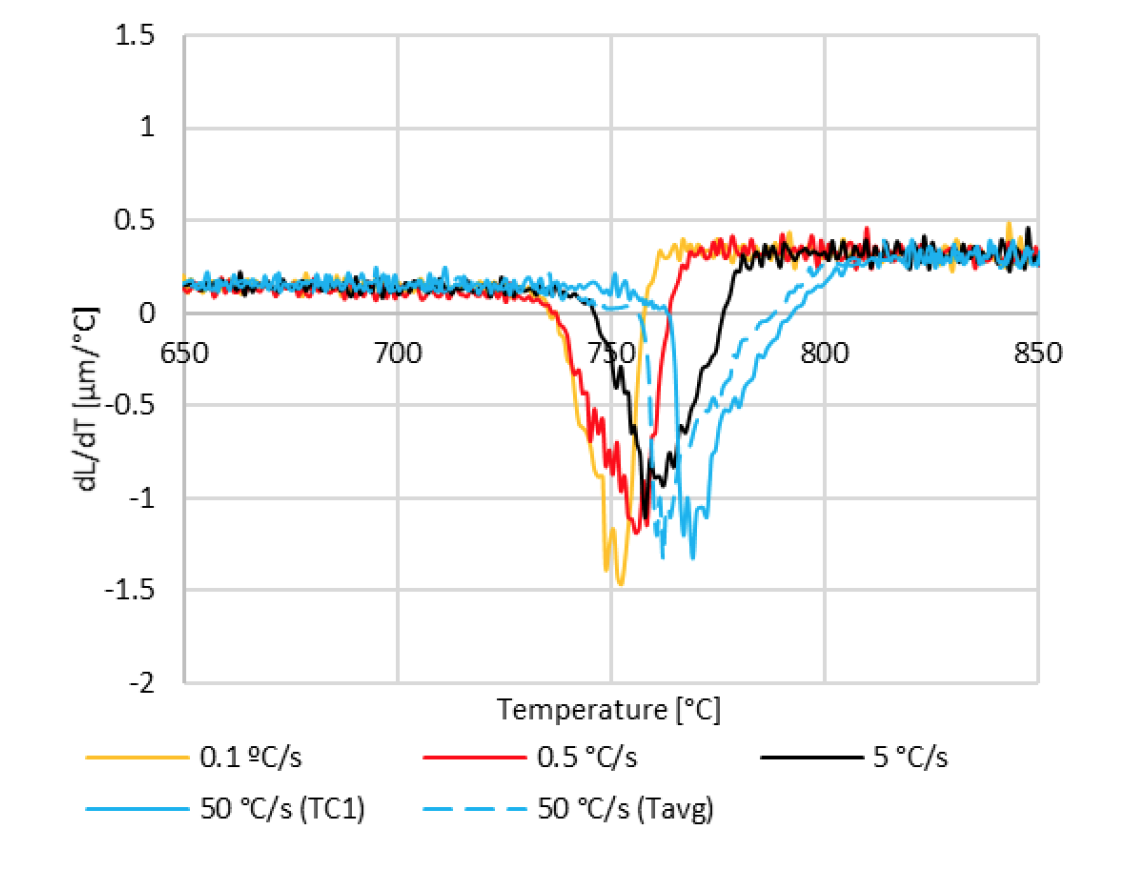 It is important to note that for the 50 and 500 °C/s cases, the dilatometer did not maintain those heating rates for the entirety of the experiments, and it is expected that the gradients will be even greater if the rate is maintained.

The study shows the assumption of a uniform temperature distribution for induction heated specimens is not always appropriate. For the lower heating rates investigated, 0.1, 0.5, and 5 °C/s the gradients may be considered negligible enough to assume temperature uniformity. For the higher heating rates investigated, 50 and 500 °C/s, the gradients should not be considered negligible and temperature uniformity should not be assumed, especially around the Ac1 to Ac3 and Curie temperature.

The dilatometry results show a shift in Ac1 and Ac3 with heating rates. The shift is also expected to continue for heating rates higher than the 50 °C/s shown. By combining the modeling average temperature and the measured TC1, it was shown that while Ac1 and Ac3 are shifted to higher temperatures, the values corresponding to the measured temperature are greater than those corresponding to the average temperature. In other words, the surface mounted thermocouple over estimates the transformation temperature during heating due to the thermal lag in the majority of the specimen. This behavior is expected to be greater for higher heating rates.

The study shows that using equilibrium transformation data or data from slow heating rates does not apply for induction heating dilatometry experiments with high heating rates, especially at or above 50 °C/s.

The authors acknowledge the support of Fluxtrol, Inc. and the corporate sponsors of the Advanced Steel Processing and Products Research Center, an industry/university cooperative research center at the Colorado School of Mines.

[2] Clarke, K. D., and Van Tyne, C. J., The Effect of Heating Rate and Prior Microstructure on Austenitization Kinetics of 5150 Hot-Rolled and Quenched and Tempered Steel, Proceedings of MS&T 2007, September, 2007.